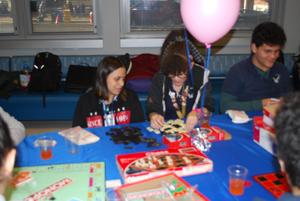 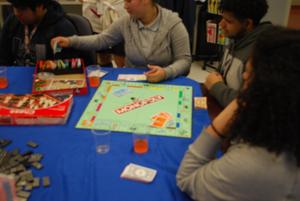 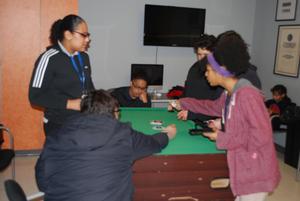 If you think it’s impossible to get young people to put down their cell phones, then you should drop by the high school Thursday afternoons for Game Night After School.

Developed by the School-Based Youth Services Program staff and its Director, Nivia Rojas, the Thursday game program is open to all students (under age 16 must have parental approval) and features a wide array of retro board games, including Monopoly, chess, Pictionary, Uno, dominoes, Scrabble, air hockey, a foosball/pool table.

On a recent Thursday afternoon, more than two dozen students participated in playing the board games, along with eating snacks and popcorn made from an old-fashioned popcorn machine.  Best of all, there were no cell phones in sight and students were engaged in lively conversation.

“Communication is an issue we’re always dealing with,” explains Ms. Rojas.  “Getting students to communicate is one of our primary concerns and we believe these kinds of activities do help foster one-on-one and group communication,” she adds.

One-twelfth grader, Kiernan McGrade, says she enjoys the program because “it’s kind of like a family.”

Another student, 11th grader Genesis Taveras, was deep into a game of Monopoly and admitted to playing the board game when she was younger but then dropping it.  Now, she says, “this is more fun, hanging with your friends.”

The Thursday after school program is one of just many offered by Ms. Rojas’s staff.

Wednesday afternoons there are two choices: Ambassadors, where students have the opportunity to plan events and school trips and serve as a student leader (Sharon Bale-Pena); and Vocational Group, addressing skills, career assessments and resume writing (Ms. Presley).  Also available on Thursday afternoons is the Relaxation Group, where students learn positive ways to manage stress and anger, including Yoga (Tom Tuchler).

In the mornings from Monday through Thursday, there are Breakfast Clubs from 7 a.m. to 8 p.m.